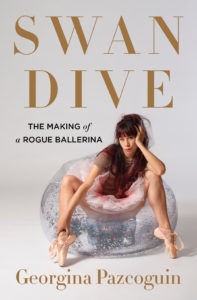 What does it take to be a member of one of the most prestigious dance companies in the world? What are the sacrifices to the art form and it’s life style? Most of us have no idea.
Georgina Pazcoguin, aka The Rogue Ballerina, was born in Altoona, Pennsylvania and began training at the age of 4 at the Allegheny Ballet Academy. Georgina joined New York City Ballet in 2003 and became the first Asian American female soloist in NYCB’s history, after being promoted in 2013. Additional credits include Victoria in CATS, Ivy Smith in On the Town, the film “NY EXPORT: OPUS JAZZ,” and the FX miniseries, “Fosse/Verdon.” Georgina is co-founder with Phil Chan of Final Bow for Yellowface, which raises awareness and promotes inclusivity through sincere representation of all ethnicities in the performing arts.​

All Music and Lyrics by Ilyana Kadushin and James Harrell.
This Episode brought to you by Ally Drez Web and IT Services.

Check out past episodes!